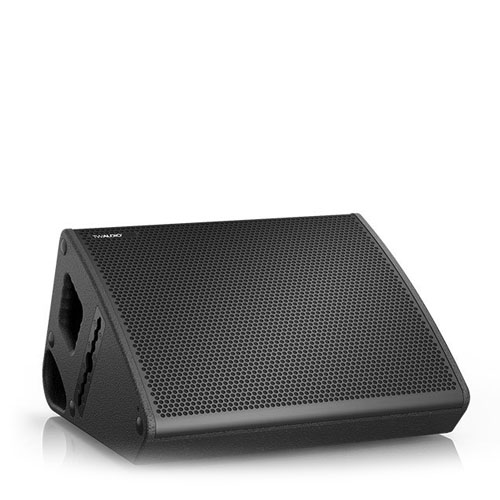 Or so they say… and sometimes, well, the good thing just takes a little longer… But back to the beginning: ‘What makes a good monitor speaker?’ we asked ourselves. It didn’t take long to find the answer – it should have a vivid and direct sound; make itself heard on stage without getting in the way, have reserves of sound level available for any style of music, be able to make itself heard at any time in any environment, and at the same time have even sound dispersion with as little tendency to feedback as possible, no great need for EQ slider adjustments, work with passive separation on an amplifier channel without an additional controller – just plug in, switch on and play!

Optically, it should blend inconspicuously into any stage arrangement. And it should also be possible to use it as a top unit on a stand or mounting. Admittedly we placed the bar really high with these specifications, but what came out at the end really deserves to be seen and heard.
The C15 is a coaxially constructed two-way monitor. In its low-profile housing it fits perfectly into every optical environment – inconspicuous, elegant and beautifully matched. Putting the grill on the outside doesn’t mean that we’ve changed the design of our speakers. Quite the opposite – we’re protecting it. After all, a real monitor has to cope with all sorts of stress on t stage, even being stood on, but still be rock solid and not fall over.

So what about its “inner values”? Its big, BEM-optimised mid-high frequency horn is derived from the tried and trusted horn used in the M12 and M15. The nominal dispersion angle of 70 x 55 degrees gives a sound field that can be used optimally and even be turned by 90 degrees if need be. The C15’s passive crossover network brings the two paths together in an especially accurate, phase-coherent way. And the really low crossover frequency of the middle-high driver makes the C15 sound even more direct in the all-important speech range. And that, it should be noted, even on standard amps with no additional adjustments needed. Its coaxial construction means, too, that every sound comes from the exact centre of the C15. No matter where you’re standing or how you’re moving on the stage. A bit more bass, maybe? Sure! The especiallydeveloped 15” chassis together with the housing and the generously-dimensioned bass reflex channels ensure definitive bass reproduction directly coupled with the floor and with a punch you can feel. And there’s still more! Like the M10, M12 and M15, the C15, too, has the tried and trusted flight rails. Using Aircargo Doublestud fittings or the swivel brackets specially developed for it, the C15 can be mounted without difficulty as a top unit and – as usual with us – no tools are needed for the bracket mounting and there no parts that can get lost. Goes without saying. Just wall mounted? Of course not! A stand flange is integrated directly into the housing as well. And of course it goes without saying that the C15, like all our products, is extremely easy to handle using the ergonometric handles let into the sides. No matter whether you use it as a monitor or front speaker. And when its work is done, you simply put it back into its optional flight case. A 60 x 60 cm space even has room for two C15s – including case!

So the C15 is a high-performance monitor which can also be used multi-functionally and, like our other products, can be optimally combined with all other TW AUDiO speakers. And in the end, one thing is certain – it was worth the wait!